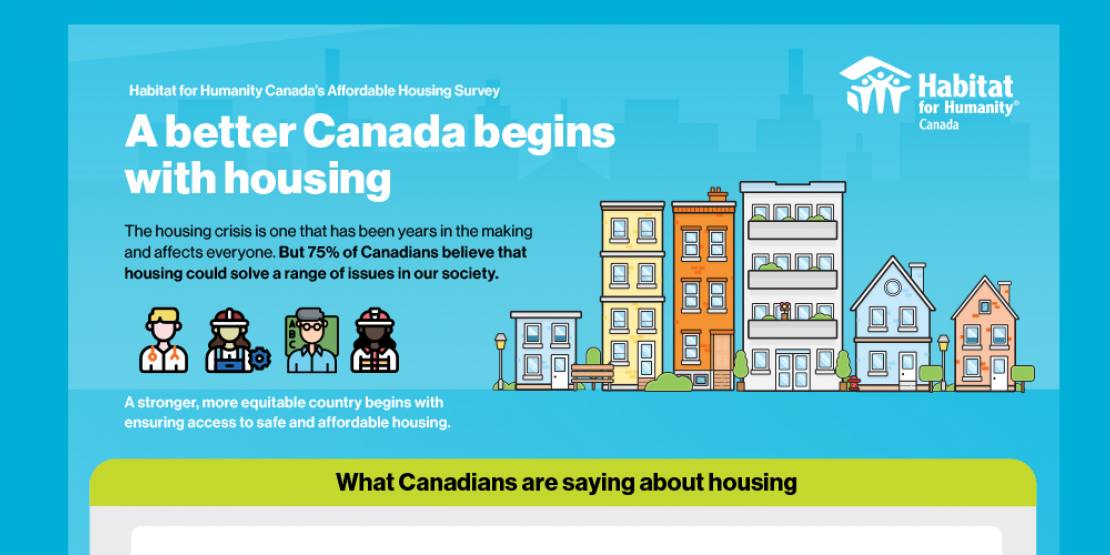 Toronto, ON - November 10, 2022 - A new survey released today by Habitat for Humanity Canada finds Canadians rank affordable housing as the third most important issue facing Canada today, behind inflation and healthcare. The Habitat for Humanity Canada Affordable Housing Survey, which measured the perceptions of Canadians, also sheds light on growing concerns and barriers to homeownership including lack of housing supply, increased cost of living, discrimination, NIMBY (Not in My Backyard) sentiment and more.

“This survey underscores how deeply concerned Canadians are about their housing situations and futures as affordable housing becomes increasingly out of reach,” says Julia Deans, President and CEO of Habitat for Humanity Canada. “To address these growing concerns and make affordable housing and homeownership a reality for all Canadians, we need an all-in approach from non-profits, businesses, individuals and all levels of government.”

According to the Habitat Canada Affordable Housing Survey, almost all Canadians (96 per cent) surveyed said their cost of living has increased this past year and four-in-five Canadians (78 per cent) are worried about having to spend less on food, savings, transportation costs, and/or debt payments to continue to afford their current housing. Other key concerns include:

Nine-in-ten Canadians (90 per cent) believe that there is a shortage of affordable housing in Canada and four-in-ten (43 per cent) see lack of housing supply as one of the greatest contributors to making housing less affordable, ahead of foreign buyers (40 per cent), and investment firms buying homes (36 per cent).

“In our work, we see firsthand how access to stable housing transforms futures and fosters resiliency across generations,” says Deans. “We must act now, and we must act together towards addressing the systemic barriers and creating sustainable solutions to achieve affordable housing for all.”

For more information on the survey, visit habitat.ca/housingsurvey